Last year on this date, I wrote on Inman: “If you have the opportunity to attend the 2019 NAR Tradeshow and expo, I highly suggest attending next week, because it will never be as influential or significant again.”

Oh my, how unfortunately correct was that prognostication?

The first National Association of Realtors Annual Conference was held in 1908 in Chicago, and after 112 years, The NAR expo has stopped its in person expo and meetings. This year, the NAR expo hall will have exactly zero vendors, zero agents and zero sore feet walking on zero square feet of expo. 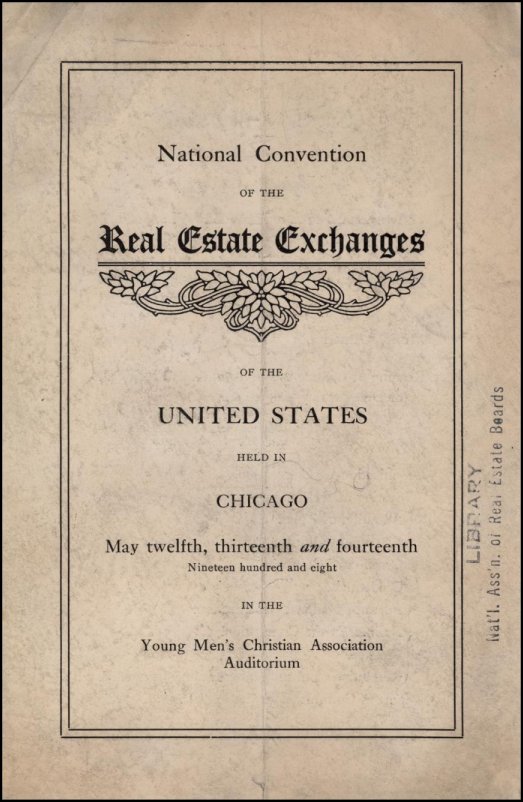 NAR 2020 was to have been in New Orleans at the convention center this week, however, that space is now a Covid field hospital. For many of us, we can’t but help and think of what we would have been missing out on this week in New Orleans. With its new digital format, NAR stretches out more than two weeks, till November 18th.

So was last year the NAR EXPO’s last dance? Not likely – there is too much profit to be made, and demand will remain high for in person events at fun destinations with friends and business partners.

My first NAR was in 2005 the same location as last year – The Moscone Center in San Francisco.  That 2005 show was hailed as “the mother lode for real estate industry professionals, greenhorns and grizzled veterans alike”  and featured speakers included Dr. Phil and Guy Kawasaki and a performance by Glenn Frey of The Eagles. The first time I entered the Moscone Center for NAR, I was astonished at the scale of the event. It was massive – on both sides of the street in two halls with exhibitors jammed everywhere. Over the years, attendance  continued to grow and peaked at around 26,000. The opulence and magnitude of the booths was astonishing, the parties epic.

Attendance and vendor count is a good way to measure the health of an event and 2005 was at a near peak for vendor participation with more than 550 booths.

This is not some far off over the horizon issue, but rather is happening right now, under our feet.

While it’s too soon to write an obituary, the writing’s on the wall.  This is the sunset of an era and last year was the last great NAR EXPO.

Besides the off year caused by the pandemic in 2020, six major factors are influencing the situation, that if left unchecked and allowed to run their course, will forever alter the size and scope of the conference and its attendance, resulting in the slow demise of a once great trade show event.   From my position, I feel there is little that can be done to slow these market forces.

iBuyer is a more efficient real estate process than the traditional method.  This efficiency currently represents a small segment of the market, but is growing at a significant clip. iBuyer also focuses on middle of the road homes (not extremely large or small) and those are the easiest homes to market and sell – this automation will reduce the quantity of inventory in the market (the low hanging fruit) and the remaining inventory will be fought over by those agents that specialize in the edge cases that can’t be automated.

Secondly, in a recent post by Mike Delprete post, he points out that ibuyer is eroding commission percentages for the buyer agents.  Thus, in both cases,  fewer easy commission dollars available and less lucrative career = fewer agents.

The population that moves is shrinking, and we are becoming less nomadic, more rooted to our geography. Fewer people move now than at any point in our lives.  Actually, it’s the fewest movers since the US Census started tracking in 1948.  At last check, only 9.8% of people move annually per census data – and that includes RENTERS, who make up about 50% of annual moves.  Many factors can be considered here, but with buyer affordability down, renting has been on the rise.

There is a shift or rather, a slide going on in the industry that is beyond the control of agents, teams and brokers as individuals. Brands, however, do have a strong say in this fate.  Brands are increasingly adopting the “loss leader” approach to running the real estate business.  (Loss Leader: selling a service under market value in order to get additional business) The real estate transaction is the loss leader.

Agents want a larger commission split, and that money comes out of the pockets of brokers and brands.  These 100% models also now have other benefits like caps, health care and stock… they are flourishing currently.  It’s frequently the right move for an individual that knows the business.  But how does a brand stay in business when they make pennies on the dollar for each transaction? They make money on the mortgage, title and ancillary services that surround the transaction. Advertisers, exhibitors, vendors know this, and we are seeing an increased interest in the other side of the coin as well.
Our team has found fantastic opportunities at mortgage events.

Multiple lawsuits currently threaten the very foundation of the majority of real estate brokerages. But I am not anything close to an attorney. Rob Hahn has deep knowledge in the space and has written extensively on the subject.  In summary – 1099 as a method for employing real estate agents is under an intense spotlight at the moment that litigators are eagerly pursuing.  Should a suit win, it will likely set president and the agent as a contractor model would fall like a house of cards.

In order to help save the industry, NAR has implemented a plan that includes planned obsolescence of its numerous MLS’s and Associations.  NAR is ritual sacrificing its own, removing and reducing the number of member MLS’s.  Why does this matter? According to NAR attendance data, roughly 40% of NAR EXPO attendees attend the event with flights, dinners and hotels paid for by their association or MLS.  NAR is forcing out (and I agree with the move) people, reducing operational overhead and yet shooting itself in the foot, by reducing its own membership and attendance.

As the economy turns south, and we face a serious lack of inventory, there will be a reduction of agents as low earners decide not to pay their subscriptions and mls dues and to keep their licence valid, instead opting to invest elsewhere less risky.   This phenomenon reduced more than 400,000 (ballpark) agents in the previous downturn taking with them an unknown reduced number of Realtor dues, RPAC donations, SAAS investments, hardware and software etc.

What does the Future Hold?

Yes, the sun will rise again.  Other than this year (and maybe next?), the NAR expo is not going away anytime soon. The point here is that the expo runs on vendors’ bank accounts.  More vendors = more revenue for NAR, and optically, more vendors looks better, increasing member attendance.  It’s interwoven.

Revaluate spent a king’s ransom exhibiting in Boston with our NAR stage and we were far from the biggest spenders.  Booth traffic was great and we had record sales.  Our 20×20 booth was supposed to be near the middle of the hall, yet because they didn’t sell out,  we were at the end of the exhibits.  In the videos and photos from our stage, you can clearly see acres of concrete that are empty behind our booth…. NAR didn’t come close to selling out the booth space. And that was pre covid.

Vendors only spend the money on booths because of the traffic. If there were not traffic, there would be zero booths. Thus, when traffic is reduced, the vendors see less value and fewer vendors will participate and there is less revenue for NAR.  With fewer vendors, the event becomes less valuable to it’s attendees – and fewer people attend, reducing revenue for NAR.

However, I’m  encouraged as I look to the future.  I am already thinking about NAR Expo 2021.  Currently it is planned for SanDiego, my former home town. It’s always a fun location and I look forward to reconnecting with people face to face at that time.  But after taking a year off, they will face new challenges in addition to the 6 other issues that stack the deck against them.

So pay heed my friends. Attend digitally this year, and get ready to head to San Diego in 2021.  I hope to see you and The Scarf King there.