Are These 6 New York Pied-a-Terres Nefarious?

Last week the New York Times LOUISE STORY and STEPHANIE SAUL unveiled an article that is an epic story about the concealed identity of a handful of businessmen, many from out of the country, who purchase staggeringly expensive pied-a-terres in New York. There was a direct line drawn connecting the frequently illegal business actions of the buyer and the buildings that seemingly protected the anonymity of buyers.

According to the Times, 80% of units sold in Time Warner Building in 2014 were bought by shell companies, so as to cover the identity of the purchaser.  The Times found 16 individuals with “sketchy” backgrounds hidden behind the shell companies.

The article seemed to be laying out a plot for next summer’s blockbuster crime action thriller – with money and power, deception and crime all wrapped into a Real Estate package.

The article focuses on 6 buildings, all with storied backgrounds themselves, and all with sweeping views of the southern end of Central Park.  With protected views of this caliber at these prime locations, one can see they are a hot commodity.

Clearly, the sales people and building management are in the Real Estate business – their duty to help move units and service the buyer’s needs.   But what if there were a pattern of neglect, deception and sketchy business practices outside the nefarious looking transactional shell game?

We decided to Revaluate the six prominent buildings in the NYT article.

We were curious – Were the owners of these units in fact also being led astray by sketchy building management and careless ownership?  What (if any) problems would the real-life Tony Stark,  Bruce Wayne or Dr. Evil face when returning to their pricey penthouse pied-a-terre?

We Revaluate the Quality, Expenses, Environment and Safety of six premier New York addresses, looking at recency, severity and proximity of violations, problems and issues. 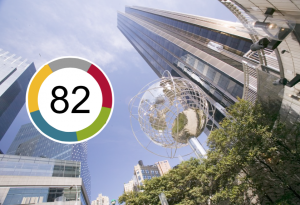 The Trump International has a high Revaluate Livability score of 82.  Safety, Quality of Life, Environment and Expenses look to be much better than average.  We found a few records of mold and heating issues that had already been resolved.

The building looks sharp and looks to be well maintained.  No Complaints at this time, but you can check out our full report on 1 Central Park West. 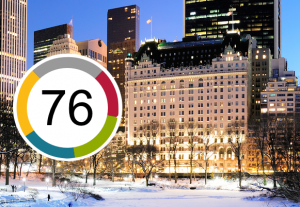 Perhaps the most well known of this list, The Plaza is home to famous movies such as HomeAlone 2, Crocodile Dundee and has been home to many celebrities over the years.

Revaluate scored The Plaza’s Livability at 76 – the lowest of the six luxury buildings listed in the Times article.   Built in 1907, it’s also the oldest of the buildings, so it may not be surprising that maintenance is a constant issue here.  From our report’s data, we can see that victims are frequently removed from stalled elevators by the fire department.  It’s also apparent that their elevator permits and maintenance are an ongoing source of headaches (leg aches?) for guests and residents.  Violations such as “Failure to maintain elevator in code compliant manner” and “failure to file annual elevator inspection on time” show a disproportionally large problem dating back years.

There is good news. Looking deeper into the building we can tell you that the expenses are super low – So, it looks to be an amazing deal, especially if you like stairs.

You can read more details about elevators and permits, heaters and litigation on our full report of 768 5th Avenue. 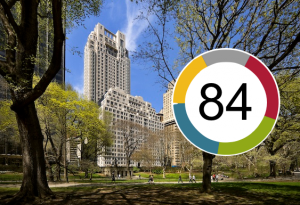 Built in 2005, the newest building scored here is 15 Central Park West.  Revaluate scored it an awesome 84 for livability.  This place looks pretty sweet.

Should you consider moving in, we dug in and found 3 litigation records that may be worth investigating. (Tell your attorney to thank us for the billable hours).

Also note worthy – since it’s such a new building, it’s a little sad to see that it was deemed to have “Poor energy efficiency (local law 84: energy efficiency working grade: d+)”.  Thats not good.  In high school,  a D+ would surely get you kicked off the dressage or polo team.

You can check out the Environment, Quality, Expense and Safety grades and ratings for 15 Central Park West in our full report. 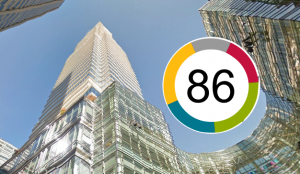 Built in 2001, the folks who live at One Beacon Court have a Revaluate score of 86 – the highest rating for livability of the luxury buildings listed here.  Living here is like staying one step ahead of the Joneses.

They’ve had some recent elevator issues, and with 54 floors, this is something to keep an eye on.

Maintenance and management seem to be doing a fine job, but you can see the gleaming details for yourself on our full rating report for One Beacon Court. 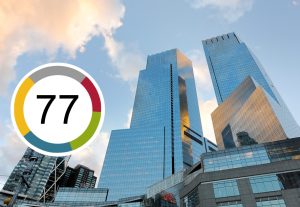 The fire department and health department have spent some time at the Time Warner Building recently.  But the violations and records they show are pretty tame.   Management also seems to have an issue with permits and record keeping – that issue may be worth looking into more.  Revaluate rated the building a 77 – pretty darn good, but not great for being such a high end address.

Learn more by checking out our full rating report on 10 Columbus Circle. 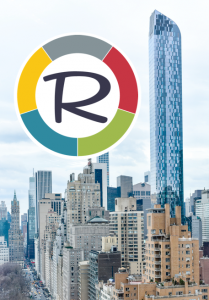 One57 is a 75-story (marketed as 90-story) building that is under construction.  The project gained national attention as Hurricane Sandy was coming ashore. TV cameras were fixed on its damaged and broken crane as it dangled high above the city.

It will be 92 condominium units on top of a brand new flagship Park Hyatt Hotel with 210 guest rooms, earning it the title tallest Apartment building in New York.

Revaluate has yet to release a score for the building, as it has yet to open.

Revaluate is a free service for comparing livability of New York Apartments. You can check the score of your home – or your next NYC place – at Revaluate.com.