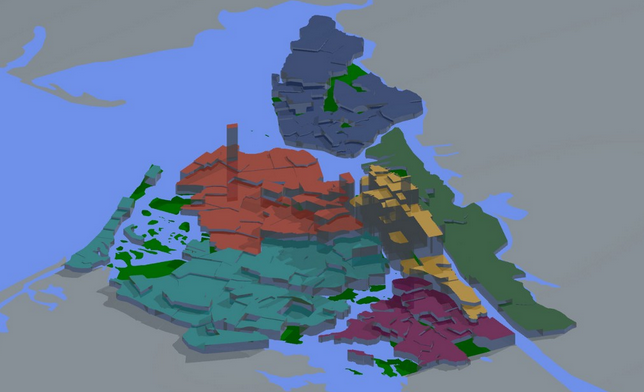 As the growth of the digital universe continues to accelerate, we now have more information at our fingertips than ever before.  One product of this new information age is the rapidly-growing art form of digital cartography.  Done well, digital maps are as beautiful and striking as any classic art form, and at the same time convey deep insights inexpressible with language.

Due its population and cultural density, New York City is the subject of some of the best map work being done today.  Here are our favorites from 2014.

Anyone interested in digital cartography is no doubt aware of Eric Fischer.  A “data artist” at Mapbox, his work is nothing short of mind-blowing.  Often working with millions of data points, his maps combine an impressive level of technical expertise, beautiful aesthetic design, and complex stories about city life.

In December, Fischer published an interactive map that plots every geotagged tweet over the last 3.5 years, everywhere in the world. 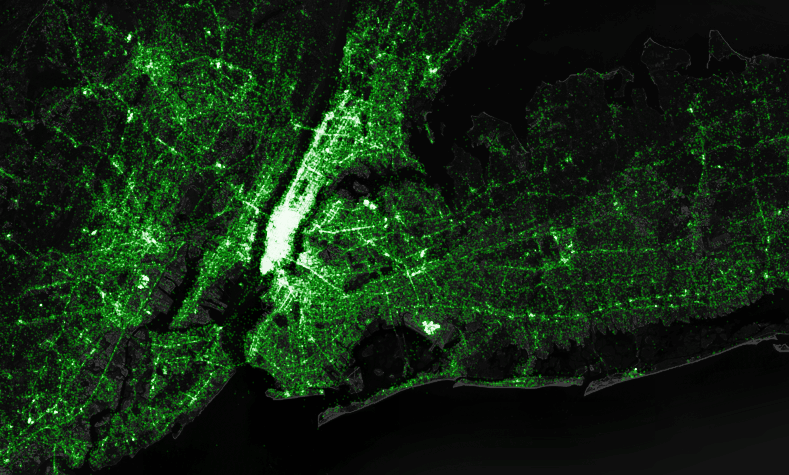 The Worst Places to Swim

Ben Wellington, a visiting assistant professor at Pratt, has a much more practical edge to his work.  Publishing under the moniker IQuantNY, he shows how open data can help you outsmart the MTA, improve the NYPD policy for ticketing bicyclists, and identify a taxi software error that generates $5.2 million a year in extra tips.

The map below is entitled “Fecal Map NYC.”  (tip: do not ever go swimming in Coney Island Creek). 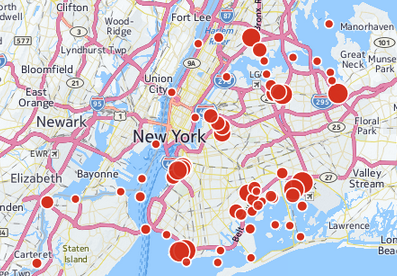 Neustar, a company that solves complex problems in telecommunications, released a provocative article in September that demonstrates with real life examples how New York City’s taxi GPS data could be used to stalk celebrities and to reveal the identities of strip club patrons.  The article goes on to make the case that a new mathematical method, known as differential privacy, should be used to anonymize such data before it is released.

I am personally a big advocate of differential privacy, so on that point I completely agree.  However, Neustar highlights a taxi ride taken by actor Bradley Cooper, pointing out that his credit card payment shows no recorded tip.  In the actor’s defense, taxi drivers often request to receive their tips in cash.  So far from being a cheapskate, he is probably a good guy. 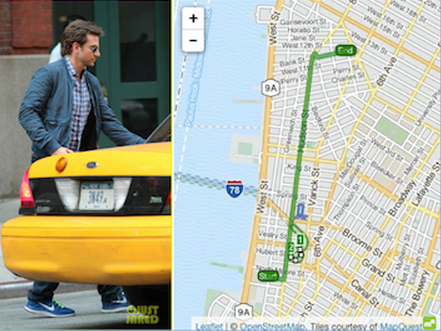 Constantine Valhouli of the Hammersmith Group, a boutique real estate consulting firm, has only published two maps that I am aware of. But both of them are among my personal favorites.  Separately, the company website has some very interesting analysis on the future of urban design – worth a look if you are interested in the topic.

With Valhouli’s interactive map of music lyrics, you can explore hundreds of specific NYC locations that have been referenced in songs.  The map covers all genres, ranging from Billy Joel’s “Big Shot” to “All Falls Down” by Kanye West. 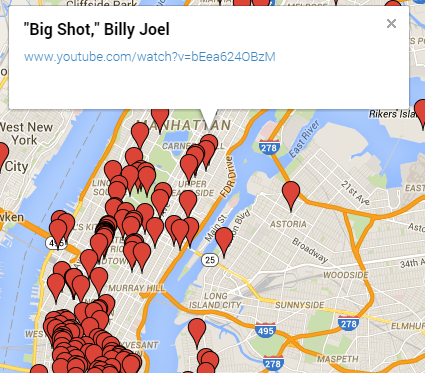 Valhouli’s second map, a 3D analysis of NYC housing prices, is as insightful as it is eye-catching.  Valhouli makes a strong case that, contrary to common perception, New York City housing is actually pretty affordable.  It turns out New York City is bigger than Manhattan and western Brooklyn.

Four times a year, the sun aligns perfectly with Midtown’s east-west grid in what astrophysicist Neil deGrasse Tyson has coined a “Manhattanhenge.”  To witness one, you can either wait until May 28th, the next time the event is scheduled to occur, or you can go to CartoDB’s NYCHenge map and find your own “henge”-event elsewhere in NYC.  According to the website, they occur on a nightly basis all over the City. 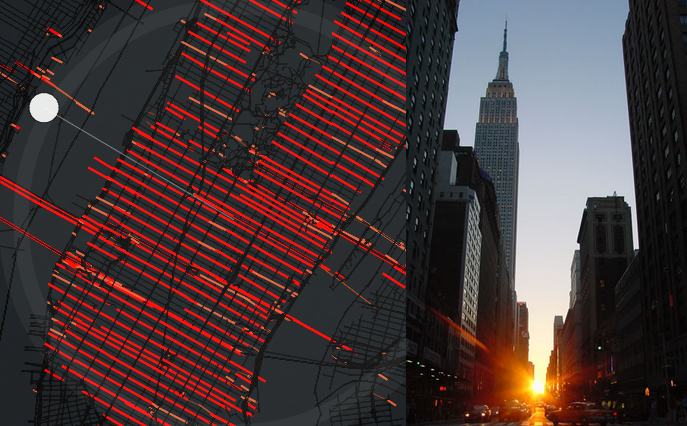 NYC Taxis: A Day in the Life

Chris Whong, a self-described urbanist, mapmaker, and data junkie, has been one of the more active advocates of NYC’s open data initiatives, taking a leadership role in Code for America’s NYC Brigade, BetaNYC.

Earlier this year, he published “NYC Taxis: A Day in the Life,” an animated map that lets you follow cab drivers’ journeys through the City during a full 24 hours.  More interesting than the pickups and dropoffs is where the taxis go when they are empty in search of new business.  For example, after dropping off a passenger in lower Manhattan, a taxi will often head uptown via the West Side Highway, a route that is faster, but has little chance of finding new business along the way – bad news for anyone searching for a cab downtown. 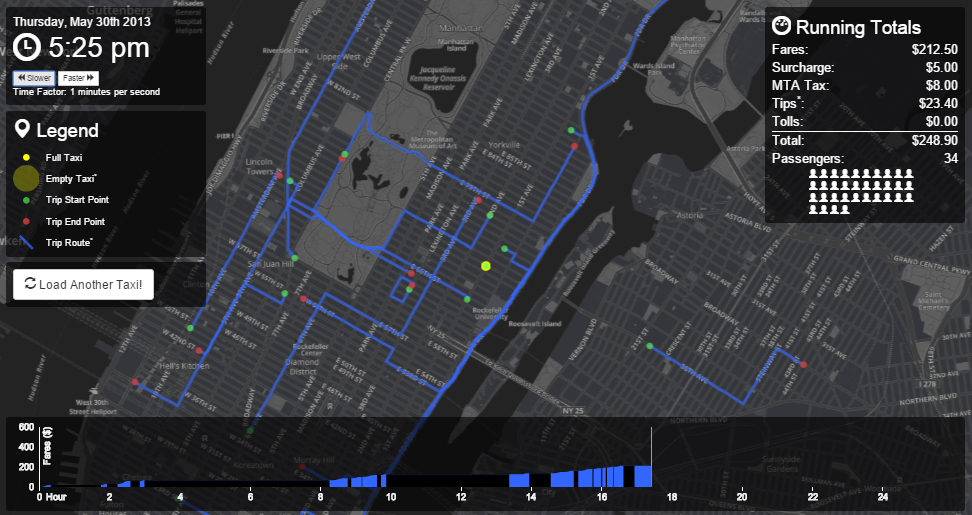 Who knew that the well-to-do Upper West Side would have such a strong showing. 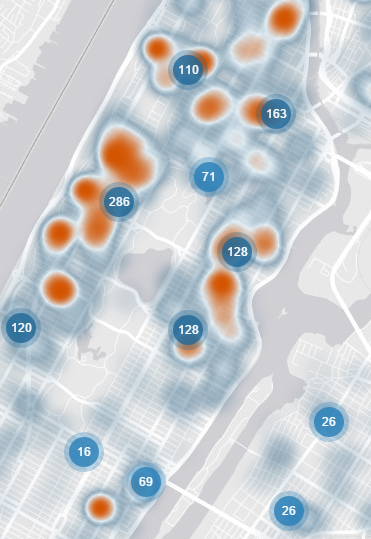 CityMetric publishes some amazing maps, offering insight on a range of topics relevant to cities around the globe.  My personal favorite of 2014 was their analysis of Manhattan’s population density over time.

If you think Manhattan is crowded now, just look at what the Lower East Side was like in 1910.

The New England Complex Systems Institute, an independent academic research institute, aims to solve real world problems by advancing the science of complex systems.  In November, they released an animated map displaying hour-by-hour Twitter activity in New York City over the course of a week.  What I found most interesting is that activity seems to peak as late as 10 or 11 pm. 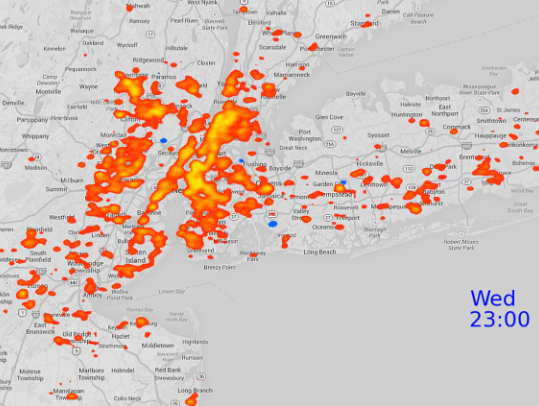 This last map, from Judgmental Maps, made the #1 spot on Curbed’s Top Stories of 2014.  For anyone offended by the stereotypes, please do not shoot the messenger. 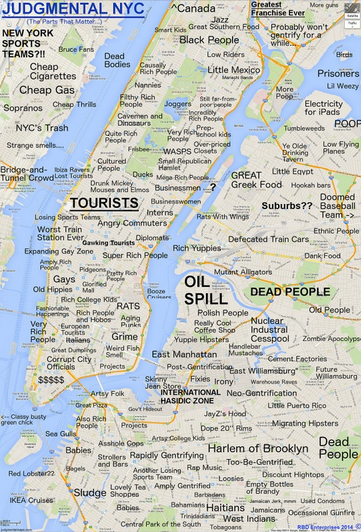 There are many more great New York City maps out there that did not make it into this list.  So we will be publishing a follow-up post in the near future highlighting those that we missed.

If you have any suggestions for maps we should include, please let us know in the comments below.