When last we spoke, we dived to the depths of how New York City, in all its gloriousness, handled various and sundry bombs.

So, it seems only fitting that, in this installment of New York City firsts, which comes to you on a day when, perhaps, people might be partaking of such things, we talk about how The Big Apple gets bombed.

To that end, did you know that the Bloody Mary and the Manhattan were both invented here and that the country’s first brewery was here, too?

It seems apropos that the city that never sleeps had a hand in keeping folks up rousing rabble til the wee hours. 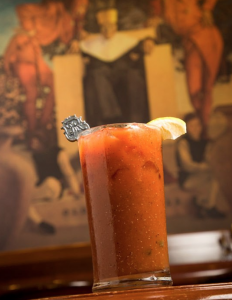 Now, there’s a bit of controversy about the invention of this miraculous, hair-of-the-dog cocktail (which, likely, many folks will sip on the morrow). Many claim that it was actually invented in France in 1921 at Harry’s New York Bar in Paris, a favorite of many American expatriates, including luminaries like Ernest Hemingway (a many who knew his way around a cocktail).

But it’s the St. Regis Hotel in New York City and its King Cole Bar who say the cocktail is theirs.

Fernand Petiot initially introduced the drink as the “Red Snapper” and it was served at the King Cole starting sometime around 1934. The libation, which has become a ubiquitous part of brunch and the gentle massaging of hangovers ever since, is a zippy mix of vodka, lemon juice, tomato juice, Worcestershire sauce, Tabasco, black and cayenne peppers, celery salt, and whole peppercorns (it’s usually garnished with a lemon wedge and a celery stalk, though bars far and wide have now taken those garnishes to levels never imagined by the St. Regis set).

As for the drink’s name, no one’s quite sure. Some say it’s named for Queen Mary 1 of England (“affectionately” known as “Bloody Mary” for her tyrannical behavior), others say it’s named for actress Mary Pickford. Whatever its origin, we know it’s downright delicious and that it’s been getting New Yorkers bombed for going on a century. 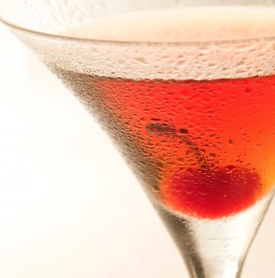 Ahhhh, The Manhattan. The quintessential American cocktail. And as you might have guessed by its name, it was served first in New York City!

The delicious concoction, usually made with rye whiskey (though many folks use bourbon, instead), sweet vermouth, and Angostura bitters (though this writer likes to mix it up with bitters of blood orange or chocolate), then garnished with a stemmed Maraschino cherry.

Have I mentioned that it’s delicious? I digress.

Legend has it that the drink was invented at the Manhattan Club in the early 1870s for a party hosted by Winston Churchill’s mother. The only problem with this story is that, at the time, Lady Randolph was very much with child and also very much in France, so the odds that story holds water are slim to none.
The earliest record of the drink was in the 1860s, when it was served by a bartender by the name of Black, somewhere near Houston street.

Several incarnations of the cocktail have shown up over the years, some of which contain Absinthe, some that don’t, but we can all agree that the tipple, in all its smooth glory, is one of the things that makes this country great (as are many of the things that were born in New York City).

As a matter of fact, I like beer. That refrain (and others like it) has coursed through many a pub, tavern, and brewhouse since beer’s humble beginnings in America. 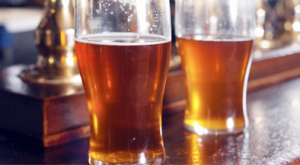 It’s hard to imagine our country without beer–at the end of 2013, there were 2,822 breweries in the U.S.–but brewing was born right here in New York City.

Back in “The Day” (you know, that one day), New York was called New Amsterdam (if you don’t believe me, you can always ask They Might Be Giants) and in 1612, after a help wanted ad–America’s first, by the way–was placed looking for, you guessed it, a brewer, the first commercial brewery in America was born.

Adrian Block and Hans Christiansen established the brewery on the southern tip of New Amsterdam, in what is now Lower Manhattan.

And Revaluate will be the first to tell you that New York is a great place to live. Not only that, but Revaluate is the first site you should check when you’re searching for a new apartment in the Big Apple. We’ll give you the lowdown on everything, from a building’s maintenance records, to the noise level in the area, to the kind of environment you can expect, and even what kinds of expenses you might incur. You’ll get it all in our comprehensive Livability Report and you can have it before you ever lift a finger to move.