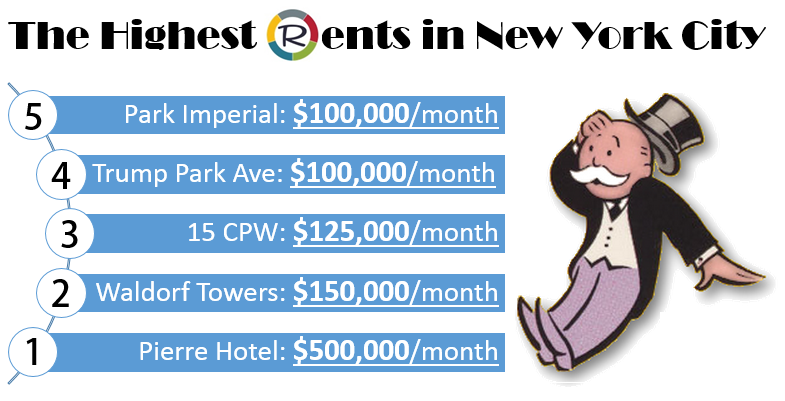 It is no secret that real estate in New York City is skyrocketing. According to a Feb 2nd story in the Wall Street Journal, over 7,000 homes across New York City are valued at over $5 million. This recent rise of ultra-high-end housing has reached such a height that the City is now considering adopting a “pied-a-terre tax,” which would generate estimated $441M in annual revenues by taxing only those $5M+ units that are used as vacation homes.

Although they have not received quite as much attention as the purchases, the highest rents in New York City are equally astounding, with several recent leases in the six-figure range, one as high as $500K per month!

Here is a look at five of the most expensive apartments ever to be rented in New York City. 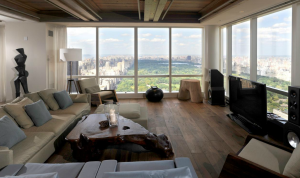 If you have allocated $100K monthly for rent and you want to live in an apartment formerly owned by an Israeli-American telecommunications fugitive who lives in Namibia (because of its lack of an extradition treaty, of course!), this is the apartment for you.

Celebrities Daniel Craig, Deepak Chopra and Sean Combs have called the Park Imperial home, along with actor Chris Meloni, whose 3-bedroom unit on the 60th floor is currently being leased to a Saudi prince for $55K per month.

Amenities of the Park Imperial include 24-hour doorman service, an indoor pool and an onsite fitness center. The apartment features a library and butler’s pantry, and iconic city views of Central Park and the Hudson River can be seen from the glass-enclosed Sunset Room, Living Room, Reading Lounge and office.  This condo was leased in 2013 by an anonymous renter for $100,000 per month.

Live like a Trump – Ivanka Trump that is.  She, an accomplished businesswoman in her own right, and her husband, real estate entrepreneur / developer Jared Kushner, live in a four-bedroom penthouse in daddy Donald’s ultra-luxurious Trump Park Avenue tower.  Situated in a coveted location near Central Park, top cultural destinations, outstanding dining options and premier schools, Trump Park Avenue also provides a high level of service and outstanding amenities.

More luxurious still are two of the buildings larger penthouse units,  PH22 and PH23, these 7 bedroom, 8.5 bath, 7,132 square foot apartments feature an impressive entry foyer in the center, an open layout with a formal living room and dining room, and a sunny breakfast room. All seven bedrooms have ensuite marble baths, and the expansive master bedroom offers his and hers bathrooms and several closets, one the size of a room.

Both penthouse units have been leased for an astounding $100,000 per month.  One unit is rumored to be occupied by Saudi royalty.  We do not know who lives in the other unit, but it is almost certainly not Arianna Huffington. 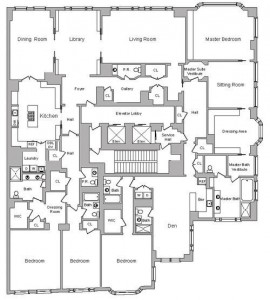 In a city with no shortage of high end addresses, 15 Central Park West stands out as New York’s most expensive building – with the possible exception of the so-called “Billionaire’s Row” buildings that are now under construction on West 57th Street. 15 CPW was completed in 2008 with design features inspired by the great New York art deco apartment buildings of the 1920’s. The building features two sections connected by a dramatic glass enclosed lobby.

Among the buildings newest residents are Robert De Niro and his wife.  Since a fire broke out in their Upper West Side coop, the couple has been without a permanent home while they wait for the unit to be renovated.   In the meantime, they have taken up in 15 CPW, renting out an apartment owned by steel manufacturing magnate Leroy Schecter at a cost of $125,000 per month.  Prior to the De Niro’s arrival, the apartment was home to Yankee Alex Rodriguez (A-Rod lived in unit 35B, before it was combined with 35A).

For the quintessential New York experience, take a walk in the footsteps of legendary Broadway lyricist Cole Porter. The iconic figure is known for perennial favorites including “Anything Goes,” “Night and Day,” and “Begin the Beguine.” The Cole Porter Apartment at the Waldorf Astoria was home to the songwriter from 1934 to 1964.

The landmark Waldorf Astoria is a world-class boutique hotel offering residences of exquisite luxury and privacy. This outstanding property is steeped in history. President Kennedy and his wife Jackie spent their wedding night here, General Douglas Mac Arthur lived at the Waldorf when he returned from Asia, and the hotel was the setting for international treaty negotiations and peace initiatives.

As a member of the National Trust Historic Hotels of America, the elegant Art Deco building provides the ambiance of Old New York reminiscent of an era gone by. The gorgeous, fully furnished 6,000 square foot Cole Porter Apartment, 33A, features a glamorous marble gallery as an entrance foyer. A 30 foot living room and formal dining room make the unit perfect for entertaining, and of course, there is a library.

While we do not believe it has had any long-term residents, the Cole Porter apartment has been rented on-and-off for medium-term stays at a cost in the neighborhood of $150,000 per month. 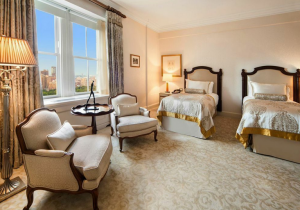 The Pierre Hotel made news in October of last year when it listed its spectacular 6 bedroom, 39th floor suite, known as the Tata Suite, for rent at an unthinkable $500,000 per month.

Only two months later, an anonymous international renter claimed the suite for a month, paying the full asking price. And if that is not enough, the same renter also leased The Getty Suite at the Pierre, which had been listed at the time for $150,000 per month.

Beside the obligatory doorman and concierge, this distinctive pre-war building provides personal butler service, housekeeping services twice daily and a chauffeur driven Jaguar – for an additional fee, of course.  Residents enjoy panoramic city views of Central Park’s Wollman Rink and the Jacqueline Kennedy Onassis Reservoir, along with the sparkling lights of the George Washington Bridge over the Hudson River. There are two onsite restaurants, Sirio Ristorante and Two E Bar and Lounge.

See also: The 5 Most Famous Apartment Buildings in NYC

Revaluate hosts the No Fee Apartments Map and displays a Carfax-like home history report with history, ratings and reviews for every Manhattan address.