Zillow is boosting revenue with its iBuyer program, Zillow Offers.  The company’s 2nd quarter earnings report showed $600M of revenue for the quarter, with $240M from iBuyer alone.  Thus – Zillow iBuyer accounted for 40% of its total revenue and the program is still in its infancy, as it is one year old. 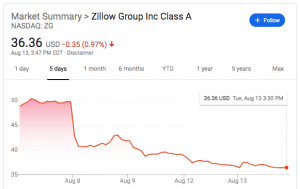 The program is gaining traction quickly after launching in early 2018. As an example of the growth, the iBuyer program in Q2 2018, the company bought a total of 19 homes.  But in Q1 of 2019 they sold almost 500 homes. It’s staggering growth and they are not keeping up with demand. IE: Demand is higher than what Zillow is willing to buy, as the company had 69,000 requests for offers from consumers in Q2 alone.

Zillow stock (NASDAQ: ZG) has been in a steady free fall since the report was released, dropping uninterrupted daily from $49/share to $36/share.

Zillow has said that it’s iBuyer profit margins are “razor thin.” Actually, according to the report, it may be less than “thin”.  The second quarter of 2019, Zillow reported that they lost $71M.  This was primarily due to the growth and expansion of the iBuyer program. Presumably this is an upfront cost for marketing and territory growth – but the loss was significantly larger than last year’s loss in Q2.

Zillow has been launching a large number of new markets in the last 2 quarters:

Zillow ibuyer won’t buy all homes.  They focus on the safe middle of the road homes that most Americans buy.  High end homes sit on the market too long, low end homes are also higher risk.  1 bed 1 bath – nope. 5 beds 5 baths – nope. Non Permitted renovations – nope. Jumbo – nope.
iBuyers like 3 bed 3 bath, ideal and middle of the road properties in order to reduce risk.   (read: the ones the algorithms won’t likely screw up the valuation, and where there is pent up demand)  Until the systems get more sophisticated, we wont see all encompassing iBuyer home purchase.

Sellers will spend 13% to 15% more when they work with an iBuyer than a traditional real estate agent according to a report from Collateral Analytics. The majority of this fee covers a difference in fees that ranges from 2% to 5% greater than a traditional real estate agency, plus an allowance for repairs and another 3% to 5% to cover the iBuyer’s liquidity risks and carrying costs.

Zillow could also face troubles if home prices decline. “A downturn in home prices, not forecast by the iBuyer market analysts, could be devastating as they ramp up their business platforms, particularly if the cost of capital increases,” the paper stated. “At the same time, downturns are precisely when the most sellers would want this option.” – Via Housing Wire.

It’s no longer debatable if iBuyer will succeed.  There is clearly demand (69,000 requests from people in the quarter on Zillow alone proves beyond doubt there is demand) The question remains, however, what portion of the market will iBuyer control in the coming years?

Industry spokesperson and professional prognosticator Rob Hahn suggests that iBuyer market share could be much more significant – going as far as to bet with several other industry insiders that we will see 60% market share in 5 years.

While ambitious – I don’t think its impossible to see significantly greater adoption across the US as long as a recession does not significantly scare off the VC’s and stockholders that are funding the purchase of these homes.

What’s your take? Will iBuyer expand beyond its current “standard” home to include lower and higher end properties in all US markets – or will we sit at something like a 6% market share limited to the very narrow middle of the road markets?