Moving Is Awesome. Or, You Know, Not. 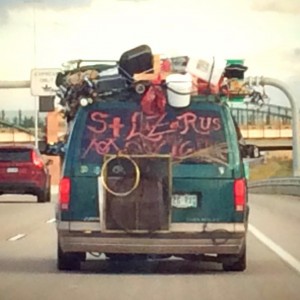 Raise your hand if you love moving!

Right. Well, it’s no wonder that I don’t see anyone raising their hands (and don’t get all smart-alecky and tell me it’s because this is a blog and this is the Internet and of course I can’t see anyone through The Google. Hush it. This is my post).

Where was I? Right! Moving. And no one is raising his hand because no one likes it. Moving stinks. Moving is slightly less enjoyable than slamming your hand in a car door. Repeatedly.

And how do I know this? I know this because I have moved more times than Kanye West has said he loves himself. Which is a lot.

So, in my capacity here with the fine folks at Revaluate—who will darned well sure make sure I know what it’s like to live someplace before I ever move again—I thought I’d tell you about some of the places I’ve lived, the things I’ve learned, and the laughs I’ve had.

There was the apartment that allowed pets. Unfortunately, this apartment didn’t fully vet (pun totally intended) its residents. My next door neighbors got a puppy for Christmas. A lovely sentiment and the dog was adorable. They thought it’d be a good idea to keep the beast’s food and such on the balcony. This is also where they’d let him outside to relieve himself. They lived on the third floor. How do you think that worked out? Oops, sorry 2nd Floor people. Oh, and they also did this when it was Polar Vortex time and it was colder outside than Cruella DeVil’s heart. The poor pooch barked and howled–CON-STANT-LY–and was generally miserable ’til a bunch of the residents banded together and got him sprung by the ASPCA.

There was the ground floor condo with upstairs neighbors that liked to put everything under the sun down their garbage disposal (what my Aussie friends commonly call a “gobbler,” which is a much better name for it). I’m serious. These people put everything in there. Coffee grounds. Table scraps. Egg shells. Heads of lettuce. Whole sides of beef. Old shoes. Small cars. And guess what happens in your downstairs neighbor’s place when you do that? THAT’S RIGHT, all their pipes and stuff get messed up. Thanks a LOT, Captain Cerebellum. I hope you step on a Lego in your bare feet.

There was the apartment where my landlord decided to sublet a room. This was all well and good, I suppose. Peaceful coexistence and whatnot. Opposite schedules. Peace, harmony, Kumbaya. Til Mr. Sublet died. In the apartment. Yes, really. The therapy bills were minimal.

There was the place that was all “oontz-ey.” What do I mean by “oontz-ey”? Well, I’ll tell ya. My upstairs neighbor, bless his heart, was nocturnal. And a club kid. And loved techno music—you know … that stuff whose defining characteristic is that beat that goes, “oontz-ah-oontz-ah-oontz-ah”? Oy. At 3am. With dancing. Or a parade of baby elephants. We’re not sure.

In all of this, there have been some great experiences, too, and I’ve got a ton of terrific stories in my quiver. For all its “Seriously? SERIOUSLY??” moments, apartment living is terrific and a way of life I enjoy. And thanks to Revaluate, finding the place that suits MY lifestyle and the way I want to live has gotten a whole heck of a lot easier.

Now, if only they can make the moving part easier. Anyone?